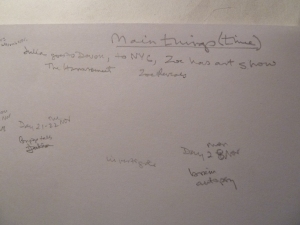 I can’t flow without facts. T doesn’t exist in a vacuum. She is not a name on a page. She is worried, scared, angry. And she is looking for her husband. Worse: she’s been lying about him. So I have to know where he was meant to be. Two hours on Google maps and Wikipedia: what are the minerals in Kazakstan (and how do you spell it?), where else would he go to get the muds and the plants for the spa, rare and exotic. Finally I get T back to her husband’s inbox scrolling through and finding Tashkent — and eeek it’s time for me to make dinner. For real I mean, not on the page.

I discover later that it will make things too easy if she can get at his emails, so decide that it’s all on his laptop which he’s taken with him. And she doesn’t know the passwords to his accounts. … Nyah-ha-ha (rubs hands and twirls moustache) I know another way that will reveal his intended locations, but T and reader will have to wait. NaNoWriMo Discovery Draft continues!